What do The Office, Parks and Recreation, Brooklyn-99, and The Good Place all have in common? All were co-created or developed by a man named Michael Schur. These shows have defined over a decade of comedy and the thread linking them all is their brilliant creator. These four shows are known for their eccentric and outrageous characters whom, despite their obvious flaws, maintain a sense of lovability that keep viewers coming back.

Three of four of these shows center around seemingly normal jobs (with the exception being The Good Place) that would normally be a pretty boring set to have a comedy show center around. However, the characters created by Schur and other developers make the shows unique and hilarious with their absurd character types.

The shows main characters, (Michael Scott, Leslie Knope, Eleanor Shellstrop, and Jake Peralta) all start as slightly, if not very, annoying, overbearing, rude, or selfish humans. This makes them hard to empathize with because they are so extreme that while they make for funny characters, they would be horrible to know in your day to day life, let alone have to work with everyday. However, as the show progresses, you begin to strip away some of the crazy of the characters, at least to the point where you can love the characters. Don’t get me wrong, they are all very much still insane, but to a level that we can love them. 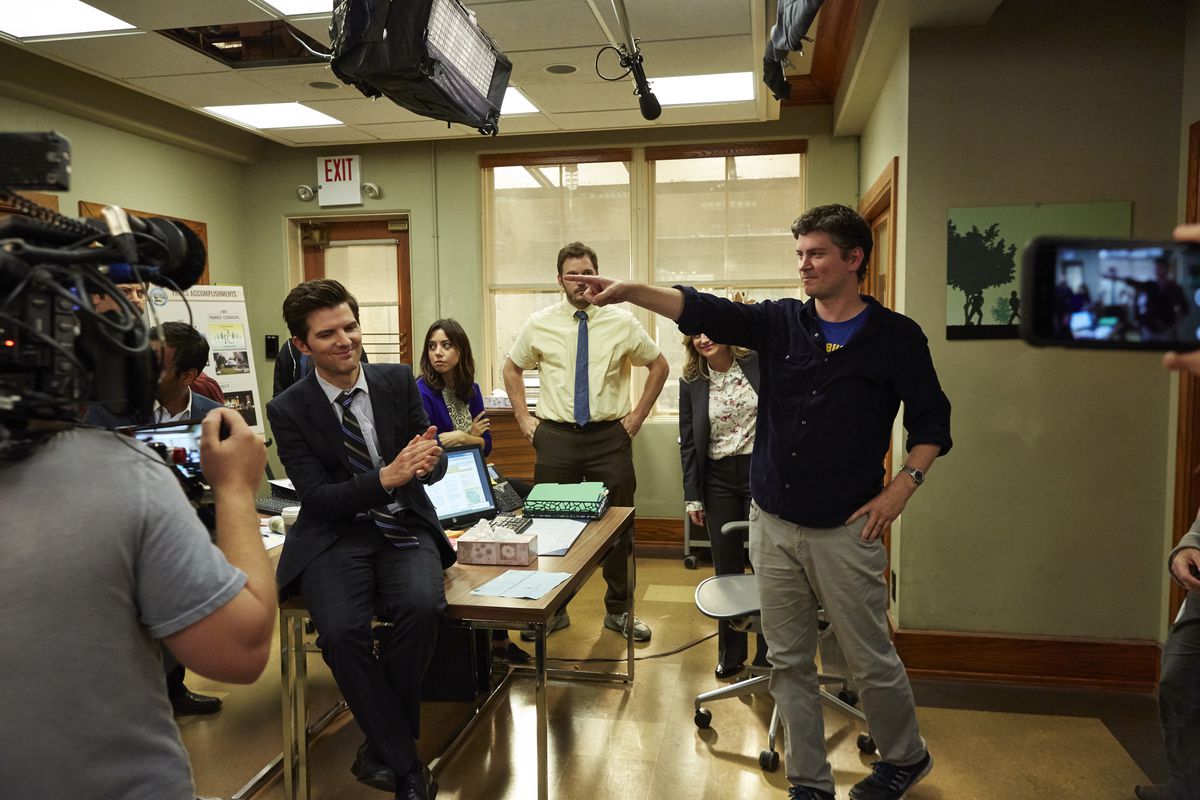 Another similarity between all four shows is the occurrence of a will they/won’t they love story. Jim and Pam from The Office, Amy and Jake from Brooklyn-99, Leslie and Ben from Parks and Rec, and Eleanor and Chidi from The Good Place. All of these love stories span over multiple seasons and involve the couple dating other people, hating each other, being friends, and ultimately, when the timing is perfect, finally coming together. The episodes of Leslie and Ben’s  and Amy and Jake’s weddings have almost the exact same story line, even down to the title of the episode (Leslie and Ben, Jake and Amy respectively). The Parks and Rec episode aired before the Brooklyn-99 one. Though I never noticed it before, once I read a Vanity Fair article talking about it (link to article here), I cannot unsee the parallels. It is obvious that Michael Schur realized that the Parks and Rec episode worked so well that with a few tweaks, the same plot could make another lovingly sweet wedding episode.

All four of these shows have very distinct ‘type’ characters. One of these types is the ‘lovable goofball.’ Jason, Andy (Parks and Rec), Kevin, and Hitchcock/Scully. While these characters by no means are the most important for overall plot advancement, they all provide a more childish humor that is apparent whenever they enter the frame let alone when they speak. Another ‘type character’ that spans over all four shows is the ‘dorks’ with Ben, Charles, Chidi and Andy (The Office). These characters have tended to be much more important and influential to the main story-lines of the show but all four of these men share the same dorkiness and the unique skill to unintentionally make people very uncomfortable by being annoying or awkward. They have many cringe-worthy moments between the four of them, but still the show and more specifically, Schur was able to create characters that despite these dominant character traits and tendencies are still characters you route for and laugh with instead of at.

These four shows are some of, if not my favorite comedy shows ever. This in large part is because of the thread that connects them all, Michael Schur. While all of these shows are unique, they also have similar, if not identical plots, characters, and overall feels. Schur is exceptionally talented in creating not just one well casted, successful comedy, but four which, even to this day, keep exceeding expectations. Both The Office and Parks and Rec struggled during their first seasons, but Schur and other creators believed in their characters and cast. And even more broadly, they believed that these shows would resonate with people. Although, to be fair, they had no idea how much that would stand to be true. Despite the absurd nature of all four of these shows, Schur was able to create something again and again that audiences loved by using the same template of one to guide each one after another.

To learn more about how The Office was created, click here.