First, it’s important to look at some statistics. The failure rate for television shows is astounding. In 2010/2011, 73% of new shows on primetime television n 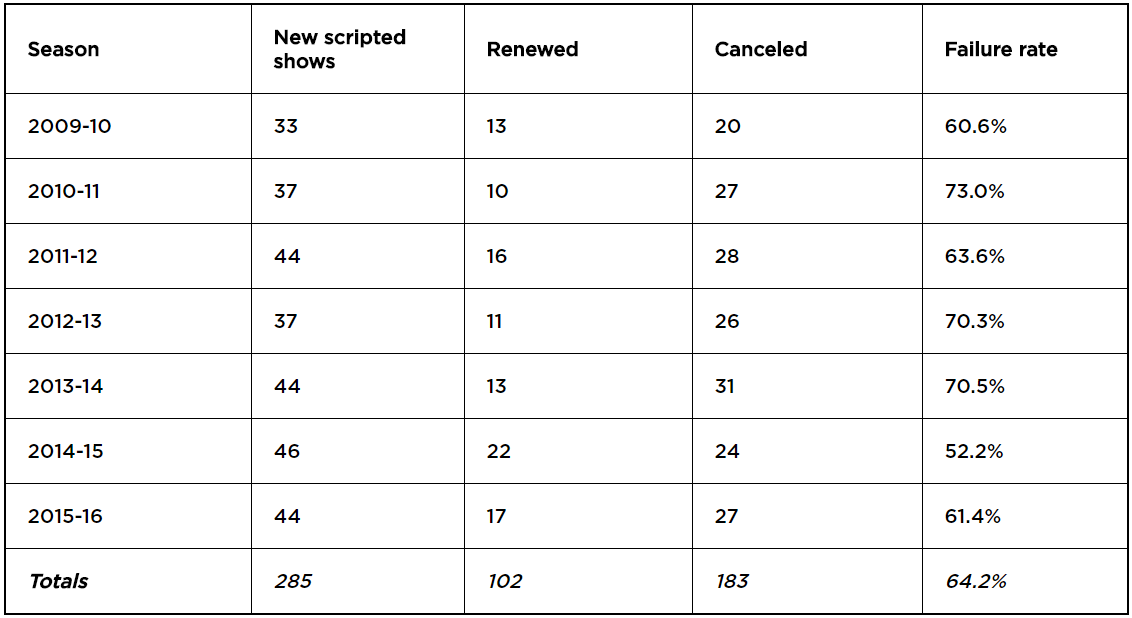 etworks were cancelled after just one season! Thirty-seven new shows were introduced, while only ten were renewed and twenty-seven were cancelled. Of those ten shows, only three are still on television today. Those shows are ‘Bob’s Burgers’, ‘Blue Bloods’, and ‘Hawaii Five-0’. In 2012/2013, only eleven new shows out of thirty-seven were renewed, and only four remain on television today! Those four shows are ‘Elementary’, ‘Arrow’, ‘Whose Line is it Anyway’, and ‘Chicago Fire.’ Two more shows from this year are still surviving on Netflix (‘Mistresses’ & ‘The Mindy Project’). Between 2009 and 2017, the best rate of new shows being renewed was in 2015, when only 52% of new shows were cancelled.

With all these new shows cancelled after just one season and many more cancelled within a few years after that, what makes some television shows have staying power and some not? CNN wrote an article about what makes television shows lasting hits. Their reasoning is “Culture watchers say a constellation of factors make a TV program last: great writers, producers and actors; a good concept; room to grow with a strong ensemble cast offering multiple story lines; a desirable time slot; audience comfort; loyal network support; and the public’s fickle taste — the wild card.” Those are a lot of different ingredients for a recipe to success. ‘The Simpsons’ and ‘60 Minutes’ are the two shows pegged in this article as having all these important factors. Also, because of the lack of change, schedules aren’t messed with. ‘60 Minutes’ has been on the same network at the same time for so many years and because of that, the same people watch it every week with more people watching it and becoming regulars every week as well.

Timing is everything. “All in the Family” was around for a long time and became a legendary show because of its timing. This show “took the well-worn family sitcom genre and placed it right in the combative generation gap between parents and the counterculture — when it really was counter.” Because of the social culture at the time and the way the show was designed, it took off with flying colors and never looked back.

Another reason why some television shows have staying power is because everyone likes a show that doesn’t take any brain power to watch. ““Gilligan`s Island,”

first seen in 1964, may indeed be the dumbest series ever to be successful in primetime; some critics have called it just that. On the other hand, it is non-taxing, and one of television’s legitimate functions, although not often recognized, is to kill time as painlessly as possible.” Shows like “Family Guy” and “American Dad” are also popular today because of this same measurement. These are shows you can watch to de-stress and don’t take any real brain power or concentration.

When I think of a television show having staying power, I think of a franchise player on a professional sports team. The franchise player generally is one of the best players on the team, has been on the team a long time, is consistent, plays the same position, and always gives the greatest effort. Just like television shows with staying power are generally very good, have been on a long time, are consistent with the content (don’t switch up the product too much), and always give it their all for the fans of the show. Successful TV shows don’t make viewers mad by making it an advertisement or hindering the product to make it worse in order to make more money. Just a little comparison for all the sports fans reading this.

In order to fully understand and appreciate how a television show can have and maintain staying power, let’s look at an example. “Seinfeld” is deemed one of the best shows ever and even though it has been off the air for several years, it’s still relevant. How is this possible? Even though the technology, fashion, and hairstyles are dated, it’s still popular because “the characters are really strong and you could put them in any setting and kind of imagine what would happen.” “Our everyday struggles feel big to us even if they’re tiny and they dramatize that feeling. Little dumb annoyances happen to you and you think to yourself this is a “Seinfeld” moment.” The “Seinfeld” moment part is very true. I sometimes think to myself that a moment is a “Seinfeld” moment because something dinky but funny happened, and it seems like a situation that would pop up in the show.

“Seinfeld” is an example of an older showthatis now off the air, but what about a show that is still relevant today? ABC’s “Grey’s Anatomy” has been on for twelve seasons and is still one of the most watched dramas on television. Even after “Grey’s” icon,Derek Shepard (Patrick Dempsey) was taken off the show, viewers kept watching week after week. “The audience wants to see how the show looks without Derek. They’re curious. How do we go on? They’re as curious as we are, as the writers are. We’re all figuring this out together. I think people tune in out of curiosity, and I think they love the characters.” The viewers of the show are so loyal that even though one of the biggest characters on the show is no longer on the show, they are still watching out of curiosity. Many shows viewers’ would be mad that one of their favorite characters was off the show and boycott it. Not “Grey’s Anatomy”. Shonda Rhimes is a genius.

What is it about a show that gives it staying power exactly? A great time slot, a consistent time slot, taking advantage of what’s popular in the culture at the time, and perhaps most importantly, a loyal fanbase. Those that become avid fans of shows tell their friends and eventually a show becomes very popular. This is rare, however, as the majority of shows are cancelled after just one season and many more don’t last much longer than that.

The most important follow-up question is: Will a television show ever be as popular as “Seinfeld” or “Grey’s Anatomy” or any other long-term show again? Maybe, but not on television. Many people are cancelling television subscriptions in favor of Netflix and Hulu. Producers are gearing shows toward these online streaming services now instead of television. It’s possible a show on one of these streaming websites could become “the next big thing”, but that has not happened yet. Television, media, and social media has changed so much since “Seinfeld” and “Friends” was on television and attention spans for shows and media are so much shorter, that a show would really have to be a hit in order for a show to become legendary again.

7 thoughts on “Staying Power: What Makes A TV Show So Popular?”