I have to say “Game of Thrones” is one of the best TV shows all around I have ever watched, especially because of it’s complexity and cinematography. The show is so well thought out that when I first started watching it, I honestly had no idea what was going on because I was so intrigued by the production. The backgrounds, makeup, costumes, locations, everything about this show is almost breathtaking. Not to mention the characters and story lines are incredible as well. Throughout all of the seasons thus far, I cannot say there is an episode where it doesn’t feel like you are watching a film, which I believe is what makes this show so special and unique. Every episode you watch feels as though you are watching a film that took years to make.

There are so many things that go into making a TV show so great, but I do have to say that “Game of Thrones” absolutely kills it! The makers and directors of this show put so much detail into making every moment perfect. In the very first episode, the costumes are such a huge part in learning who each and every character is. For instance, Arya’s costumes in the entire first season help you understand her personality. She was always wearing braids in her hair and sort of dresses like a boy, but this helps me understand that she is a tomboy who is in a way, pretty badass. Arya is one of the most badass characters in the entire show, and her costumes are such a good reflection of her personality because they are always very masculine. Going along with this, you can always tell who are the kings and queens by what they are wearing as well. Most of the kings wear very large armor and the queens are always wearing beautiful dresses, while on the other hand, everyone else wears very raggedy clothes. In an article on fastcompany.com, there is a part where they talk about a character named Margeary. Mageary is marrying into the family and her wedding dress is an exact replication of her personality. In the article they describe her personality as “very beautiful and very dangerous”. To mimic her personality, her wedding dress was made up of roses and her crown was made up of thorns. The article describes this as “everything we need to know about Margeary.” Costumes are such an important part of a TV show because it gives the viewers an idea o.f what a character’s personality is and also what economic status they hold. 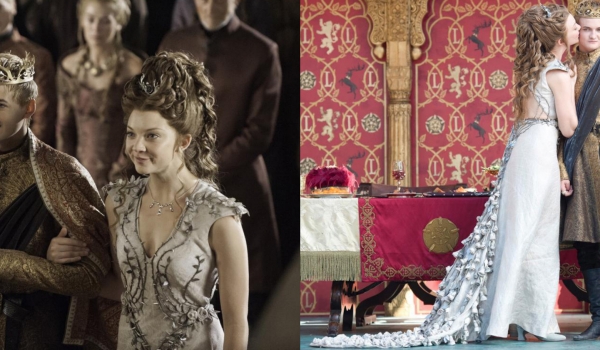 The cinematography on “Game of Thrones” is not only impeccable, but important for understanding the show. The first thing I want to talk about is the fact that in the first season of the show, they used candles to light an entire scene. By lighting the entire scene with candle light, it made the show seem much more dark and mysterious but I would have never known if I hadn’t looked it up. I find this to be so amazing that you can light an entire scene with just candle light, but this also gave it such a different lighting effect.They were all living in tents because a war was about to happen and instead of using normal lights for brightness there was a perfect amount of darkness and lightness.

Another amazing thing that the creators of “Game of Thrones” do during the last season is have a real life giant on the show. In “Game of Thrones” there is a lot of CGI creations but the giant is completely real. But what is so cool about this is that they didn’t animate the giant, they just make the set 10x smaller than usual so that way the “giant” looks bigger than he is in real life. I think this goes along with camera angles because they filmed this using a low angle shot to make things look more real than what is actually being filmed. An article I read on “No Film School” states that they will shoot scenes based on location and not by episode, which means that the way they should episodes are never in order and they will shoot an entire season in one place and then go to another place and shoot the rest of the season and then put the episodes together. This is such a unique way to film a show, but I think that it makes the show even more special. There is nothing really normal about the way that “Game of Thrones” films their show, but I definitely think that it helps shape the show and makes it unique.

Sound is also such an important part of a TV show and “Game of Thrones” absolutely kicks butt in the sound department. During an intense moment, you will always hear music that makes you sit on the edge of your seat wondering what is going to happen next. There is not a lot of moments in the show where there isn’t some type of noise in the background making you even more interested to what is happening. If there isn’t music in the background there is someone on the show singing something, which I think makes things even more intense. In one scene during the first season, there is a group of ladies gathered together in a tent and they all start singing a song that cerasi started singing. It made the scene super intense because it was almost as if they were singing to find comfort in one another when they knew they might not live much longer. In one of the last scenes in the last season, there is the most intense yet calming music which made me unable to leave the seat I was in because I had to know what was going to happen. I truly believe that if there was no music or sound during “Game of Thrones,” the show wouldn’t be half as interesting as it is. Their music choice is also something that you probably have never heard before, it’s not the type of music you would sit and listen to on your own which makes it even more perfect for this show. Never in my life have I watched a show where the music makes me want to keep watching, but somehow this show nailed that.

All around, this show is so completely unique in every aspect, with the costumes, cinematography, and sound I have never seen a show like it.